JR CARPENTER on The Dot Award 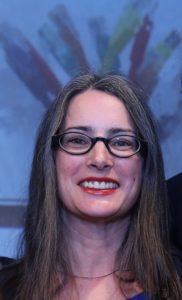 In my submission for the Dot Award 2015 [http://newmediawritingprize.co.uk/focus-on-the-2015-dot-award/] I proposed to create a new web-based piece called This is A Picture of Wind. I intended for this work to expand upon a short text written in response to the storms which battered South West England in early 2014, resulting in catastrophic flooding in Somerset and the destruction of the seawall and rail line at Dawlish. Reading the news in the months after these storms, I was struck by how difficult it is to evoke through the materiality of language a force such as wind which we can only see indirectly through its affect. I began to explore weather, and wind in particular, in all its written forms.

Winning the Dot Award enabled me to explore the intertwined topics of language, weather, and climate change in a freer and more open-ended way that I might otherwise have been able to. I looked through mountains of private weather diaries held at the Met Office Library and Archive in Exeter [http://www.metoffice.gov.uk/learning/library]. One thing I figured out pretty early one is that it’s hard to study only one kind of weather. On one single page of a weather diary it is possible to see noted thunder, lightening, lilacs, a meteor, and hyacinths in full flower.

In September 2016 I was commissioned by NEoN Digital Arts Festival [http://www.northeastofnorth.com/neon-speaks-jr-carpenter/] in Dundee to respond to the theme “The Spaces We’re In”, both virtually and materially. I immediately knew I wanted to talk about the environmental impact of cloud computing by calling attention to the materiality of clouds in the sky. Both are commonly perceived to be infinite resources, at once vast and immaterial; both, decidedly, are not.

I decided to build upon Luke Howard’s classic “Essay on the Modifications of Clouds”, written in 1803. Howard was the first to standardise the names of clouds thatwe still use today. The resulting work, The Gathering Cloud [http://luckysoap.com/thegatheringcloud] launched at a Pecha Kucha Night [https://vimeo.com/195765759] in Dundee on the night of the US elections. I hadn’t intended for the title to wind up sounding quite so ominous, but I do think that now more than ever we need to find ways of talking about the enormity of climate change in human terms that we can understand and act upon.

JR Carpenter won the Dot Award in 2015 and went on to win the New Media Writing Prize for The Gathering Cloud.