JAMES ATTLEE on THE CARTOGRAPHER’S CONFESSION

It is a great honour to win the New media Writing Prize. Chris has asked me to describe one particular ‘creative moment’ that happened during its genesis, so here goes.

Several of my previous books are categorised under ‘travel writing’ in bookshops and have depended on wandering, chance encounters and observation of the landscape. The Cartographer’s Confession, however, is fiction— locative fiction, that releases parts of the story dependent on the participant’s geographical position. Unlike a conventional novelist, who has no idea where his or her story is being read, I was choosing a particular London backdrop for each chapter; it was therefore incumbent on me as the author to answer various questions: was it a safe place for someone ‘doing’ the app to pause, take out their phone? Equally importantly, would GPS trigger there effectively? During the testing process I walked the route the story takes through the city countless times, along with the app’s producer Emma Whittaker and on my own. As I was doing so, an unexpected thing happened. My travel writer’s eye started noting details in the physical locations my characters inhabited; details they might have seen themselves. These began entering the text, shaping it and driving the plot in new directions.

One example of such a mutation took place in the West End. It is the early 1950s. My protagonist, a teenage boy who has arrived in London as a refugee after the Second World War, is forced by his guardian to come and busk the cinema queues waiting to enter the Empire Theatre, Leicester Square. Standing in the same place three quarters of a century later, the Empire’s grand architecture is partially obscured by the gaudy signage that rebrands it as The Imax Empire Casino and a vast hoarding for one of the Fast and Furious movies. Some Islamic evangelists have set up a table, handing out leaflets to the constant stream of tourists and office workers passing by, while a busker performs Ed Sheeran songs through a small portable PA. 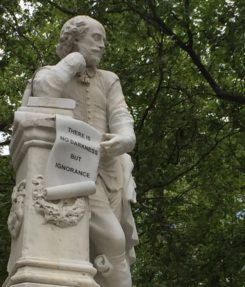 I imagine the boy, on a break from his duties passing round a hat, seeking refuge from the crowds in the gardens at the centre of the square, at the feet of the statue of William Shakespeare. I do so myself. I must have passed this statue a thousand times and never noticed the inscription to which the playwright is pointing: THERE IS NO DARKNESS BUT IGNORANCE, it says, a quotation from Twelfth Night. I imagine my hero noticing the words too, the effect they might have on him, and the plot takes a lurch sideways. The words resonate with him, inspire him to action, and recur towards the story’s end in a different setting. I am writing for a new medium and the technology is shaping my text, but not necessarily in the way I expected. If I had not needed to test the app I would not have been here, now, seeing through my protagonist’s eyes, standing where he stood and where my reader, too will find themselves, embedded in and surrounded by his story.

“Modern writers are the moons of literature,’ Samuel Johnson wrote in the late 18th century; ‘they shine with reflected light . . . borrowed from the ancients’. Imagine his surprise if he returned, to find that the reflected light writers shine with today emanates from a screen rather than a classics library; while libraries themselves have lifted off and floated into cyberspace.”  (from Review 31)