Digitisation is a huge challenge to industries engaged in making and selling books made of paper, but what are its implications for writers and readers? These are the questions if:book exists to explore.
if:book has already undertaken research for Arts Council England on digital possibilities for literature organisations, and is setting up a network to support them through changing times. The organisation has also been involved in a range of experiments with new forms of writing and publishing. Projects include Songs of Imagination and Digitisation, an online illuminated book inspired by William Blake. Thegoldennotebook.net put the entirety of Doris Lessing’s epic novel online with comments of readers alongside the text. With completelynovel.com and a team of writers, if:book recently made the 24hr book, collaboratively written, edited and printed over one weekend.
The HOTbook is if:book’s schools project, funded by the Esmée Fairbairn Trust, which imagines how literature might develop over the next thousand years.
For this month’s Bookseller Digital Focus, if:book asked some of its 21st-century experts to use their time machines and then report back from the near and far-flung future.

Bill Thompson, journalist and expert commentator on the BBC World Service’s “Digital Planet” pictures the world beyond Google; Timo Hannay, publishing director of Macmillan’s Nature.com, imagines the intelligent book; Naomi Alderman, winner of the 2006 Orange Award for New Writers for her novel Disobedience (Viking) and writer for games such as alternate reality game Perplex City, looks forward to new hybrid forms of writing; performance poet Ross Sutherland muses on the future for his artform; if:book’s director Chris Meade visits the Unlibrary; and Sasha Hoare, who has worked on literature and education projects at the South Bank, for Booktrust and with Michael Rosen during his children’s laureateship, explains in detail how HOTbook may develop present and future writers in schools.

Bill Thompson reports back from a post-Google world
Burning the books to keep power running to the servers had seemed like such a good plan in the dark days after the grid failed, but the librarians soon came to regret it once the last vellum-bound manuscript had joined the law journals, parliamentary records and works of 21st-century fiction in the ever-hungry furnaces of the power room.
After six months it was clear that the grid was never coming back, that the post-industrial world would be a post-electrical one. They would rebuild, of course. People always rebuilt, though the new society would not simply be a replica of what had gone before, the com’era, dov’era (how it was, where it was), that the Venetians insisted on as they rebuilt the campanile in St Mark’s Square in 1901. It would be different, perhaps even better.
But it would have no printed books. The great scanning had seen to that, especially after Google persuaded the US courts to amend copyright law and allow it full rights to digitise and exploit any printed text, and authors realised that under the final Book Search settlement it made more sense to abandon publishers and simply send their finished manuscript to the Googleplex.
No books had been printed for a decade, with every bookshop now operating as an advertising-funded GoogleZone. No books had been read, it seemed, except as pixels on the screen of a networked device that was connected straight to the Pagebrinary—all the world’s knowledge at only a eurocent a page. And the books that remained were now mostly gone, a final burnt offering to the gods of the data centres.
And then it began to happen, first a trickle and then a flood. People arrived at the library clutching carrier bags, or boxes or in one case a massive traveller’s trunk, all packed with books that had been put to one side, left unopened on shelves or simply lain undisturbed among discarded computers, phones and indestructible CDs and DVDs.
The people emerged with their books, and offered them to the library, restocking the city’s memory with textbooks and poetry and works of fiction. Not everything, not enough, and rather too many trashy airport novels and books about mystical intrigues involving the Catholic Church and western powers. But enough to offer a chance of rebooting one corner of civilisation a bit faster than the others, enough to get things started.
“If there was hope”, the librarian muttered, “it lies in the pages”. He was sure he’d heard that before, somewhere. 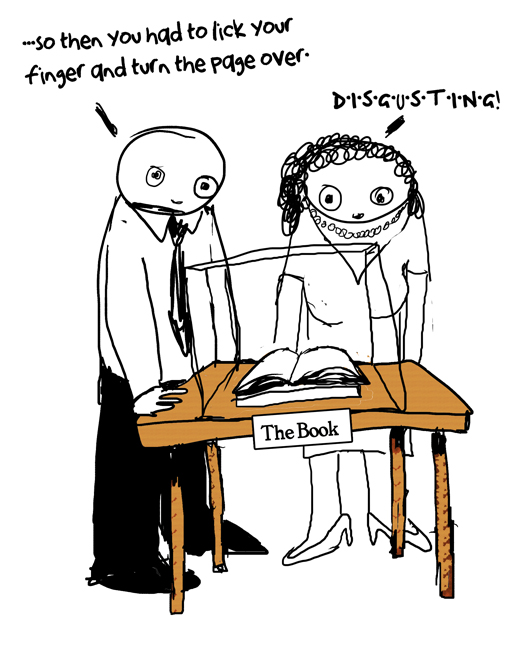